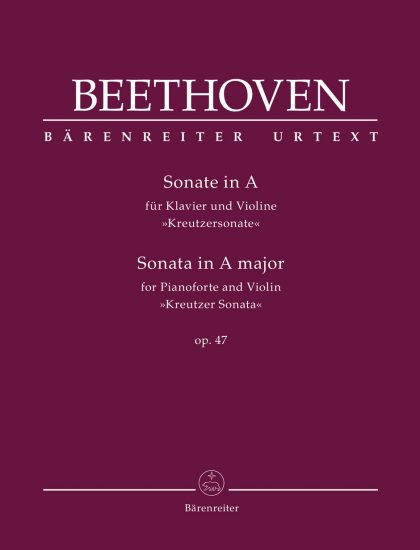 Sonata for Pianoforte and Violin in A Major, Pp. 47 “Kreutzer Sonata”

– Including detailed information on the genesis, historical editions, and Beethoven’s metronome markings

An autograph fragment of the Violin Sonata op. 47 is titled, in Beethoven’s hand, “Sonata mulattica composta per il mulatto Brischdauer, gran pazzo e compositore mulattico” – meaning “Mulatto Sonata composed for the mulatto Brischdauer, great madman and mulatto composer”. The genesis of the sonata, which was to become famous under the name “Kreutzer Sonata”, is closely connected to a visit to Vienna by George Augustus Polgreen Bridgetower (1778–1860), a violinist with an Afro-Caribbean father and a European mother. In the language of that time, his descent made him a mulatto.

Beethoven was apparently deeply impressed by Bridgetower's musicality and virtuosic abilities. However, when the sonata was published in 1805, he dedicated it to Rodolphe Kreutzer under the title “Sonata per il Pianoforte ed uno violino obligato in uno stile molto concertante come d’un concerto”. The work “in the style of a concerto” is probably Beethoven’s most demanding violin sonata and since the 19th century has formed part of the core repertoire of the great violin virtuosos.

Clive Brown’s ground-breaking new edition combines a scholarly Urtext approach with the provision of a wealth of information on historical performing practice, all conveniently united in one practical edition. This edition consists of a score and two individual parts for the violin: an Urtext-part based on the scholarly-critical assessment of all sources, and an annotated part with additional information by Clive Brown based on important topics of historical techniques and practices.
In addition to a detailed preface this edition includes information on early editions of this sonata as well as historical metronome markings.

This edition is based on Clive Brown’s edition of Beethoven’s complete sonatas for violin and pianoforte with Bärenreiter (BA 9014, BA 9015, BA 9036), which was the first edition to be published with a Critical Commentary and the complete description of relevant sources.

The pivotal Performing Practice Commentary by Clive Brown and Neal Peres Da Costa is available online, supplementing information on performing practice for each Sonata and each movement in this volume. It discusses techniques of both violin and piano playing in Beethoven’s period, as well as historical contexts and advice on phrasing and technique based on the evaluation of historical editions (s.a. von Czerny, Ferdinand David, Alard, Diémer, Grützmacher, Reinecke, Brodsky, Joachim, Rosé, Halir, Kreisler etc.).