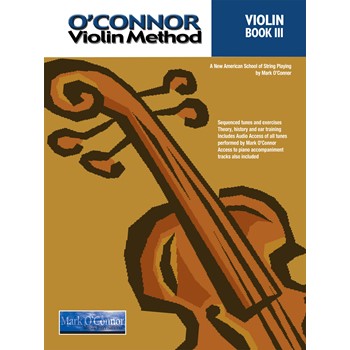 The vision of Book III is grounded in lessons presented in a format similar to that used in Books I & II of the Method representing the American Music system” and its 400-year history. From additional Boil ‘em Cabbage Down” variations introducing 2nd and 3rd positions and an arrangement of this classic tune including a second part, through four centuries of American musical history to the most recent pieces that I have composed and arranged, Book III offers a broad and interconnecting compendium of American music.

Continuing the theme that the American Music System includes the music of our immediate neighbors to the South and North, the well-known Mexican tunes Over the Waves” and Jessie Polka” as well as the popular Canadian tune Rippling Water Jig” are featured. Other foundational music included are my arrangements of the soulful spiritual Deep River” and perhaps the greatest melody from the pen of Stephen Foster, Old Folks at Home.”

Also included is another Spiritual, widely popular during the Civil Rights movement of the 1960s – We Shall Overcome” – and an arrangement of the Jewish song Hava Nagila” which was popular all over America when I was a child and presents a great opportunity for instructing the augmented second interval. I have added one of my own works to the Blues progression, a favorite from my Hot Swing Band: In the Cluster Blues”, which reveals how 6/8 rhythm can be used to understand and experience the feeling of the shuffle” created by the African style of 6 beats over 2 beats. Perhaps the best-known Ragtime composer, Scott Joplin, is represented here in my arrangement of The Entertainer” which calls the student to learn to shift to 2nd position.

“In the Texas Style fiddle tradition, I introduce advancement in technique, style and creativity with the theme and variations of Rubber Dolly Rag,” the rapid arpeggiation in Herman’s Hornpipe” and the demands of 3rd position in Grey Eagle.” I am also able to introduce students to their first fully formed jazz pieces with my arrangements of Lazy River” by the great American songwriter Hoagy Carmichael, and present Simple Gifts” – perhaps one of the signature American melodies most associated with American Classical music through the symphonic work of Aaron Copland.”
– Mark O’Connor