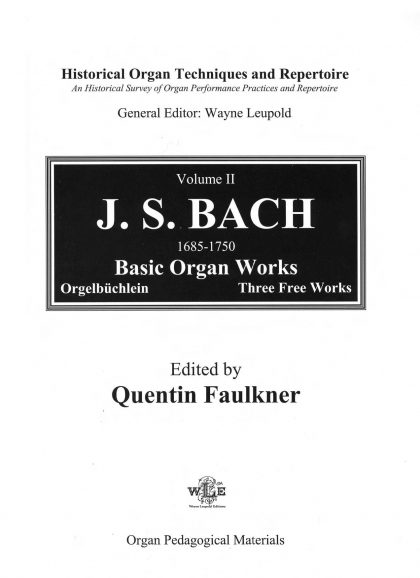 This is a series of volumes, each of which deals with a specific national school of organ music within a specific historical period (Late Medieval, Renaissance, 16th and 17th century North German, Bach, 18th century German, 16th–18th century South German, 16th–18th century Spanish, 16th–18th century Italian, 16th–18th century English, 16th–18th century Dutch, German Romantic, French Romantic, English Romantic, American Romantic, the Late Romantic Orchestral Organ in England and America, and Modern Organ Techniques). The first portion of each volume contains a preface that discusses all relevant aspects of organ performance practice: (1) organ specifications and registration practices, (2) hand positions, (3) fingering systems, (4) meter and articulation, (5) ornamentation, (6) rhythmic alteration practices, (7) a bibliography, (8) a list of original sources and organ tutors, (9) a list of modern editions, and (10) definitions of the types of compositions that were used by that national school of composers. These are arranged in a teaching format. The second portion of each volume contains attractive and appropriate organ music arranged in a graded order of difficulty, with some of the easier compositions partially or completely fingered, pedaled, ornamented, registered ,and rhythmically altered according to the practices in use at the time and place the music was written. Some of the music is for manuals only, and some for manuals and pedal. It is the intent of this series to explore in some depth the tremendous breadth and variety of styles of music and performance practices that exist for the organ from the last six centuries.