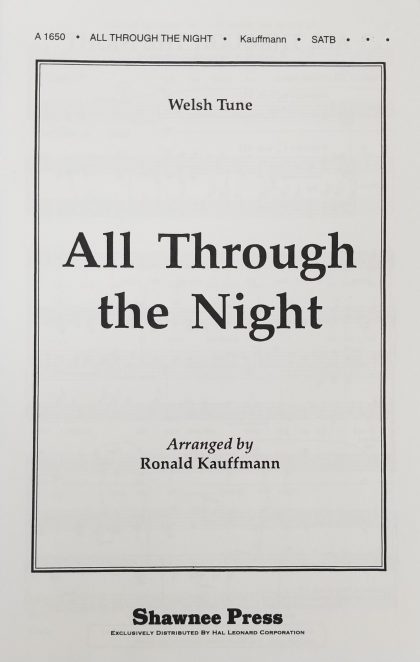 All Through the Night

Print on Demand
Please allow an additional 10 to 14 days for processing and delivery.

“Ar Hyd y Nos” (English: All Through the Night) is a Welsh song sung to a tune that was first recorded in Edward Jones' Musical and Poetical Relics of the Welsh Bards (1784). The most commonly sung Welsh lyrics were written by John Ceiriog Hughes (1832-1887), and have been translated into several languages, including English (most famously by Harold Boulton (1859–1935) and Breton. One of the earliest English versions, to different Welsh lyrics by one John Jones, was by Thomas Oliphant in 1862.

The melody is also used in the hymn “Go My Children With My Blessing.”

The song is highly popular with traditional Welsh male voice choirs, and is sung by them at festivals in Wales and around the world.

The song is also sometimes considered a Christmas carol, and as such has been performed by many artists on Christmas albums, including Olivia Newton-John and Michael McDonald, who sang it as a duet on Newton-John's 2007 album Christmas Wish. Cerys Matthews sang it solo on her 2010 album Tir.