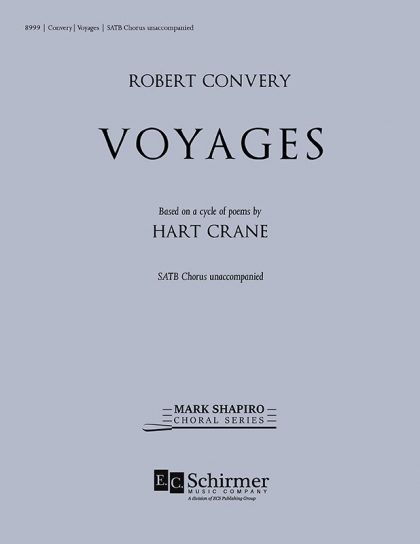 Voyages was commissioned by Donald Nally and West Chester University in Pennsylvania. The work, for unaccompanied choir, is in six movements that correspond to the six poems of Hart Crane’s Voyages. The six movements comprise a set of variations, in that the thematic material for each movement is drawn from its preceding movement. The six movements travel in a third degree harmonic progression beginning in A major and coming full circle at the end of the sixth movement. This cycle of poems by Hart Crane lives in the motion of a kaleidoscopic theme: the search for love and the self-knowledge attained in that search. The musical considerations for Voyages were made to correspond to that same kaleidoscopic center, the ever-growing changeability in understanding love, the single theme of Hart Crane’s diversely symbolic cycle of poems. — Robert Convery