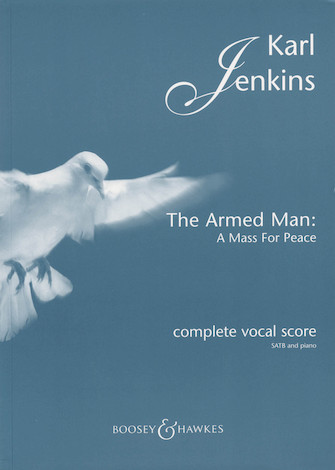 The Armed Man: A Mass for Peace

This is a powerful and compelling account of the descent into war and its terrible consequences. Dedicated to the victims of the Kosovo conflict, this work is a contemporary example of a mass based on the 15th-century French song “L'homme armé.” Set within the framework of the Latin mass, The Armed Man is a major choral work which uses both sacred and secular texts.

In addition to extracts from the Ordinary of the Mass, the text incorporates words from other religious and historical sources, including the Islamic call to prayer, the Bible (e.g., the Psalms and Revelation) and the Mahabharata. Writers whose words appear in the work include Rudyard Kipling, Alfred Lord Tennyson and Sankichi Toge, who survived the Hiroshima bombing but died some years later of leukaemia.

The Armed Man charts the growing menace of a descent into war, interspersed with moments of reflection; shows the horrors that war brings; and ends with the hope for peace in a new millennium, when “sorrow, pain and death can be overcome”. It begins with a representation of marching feet, overlaid later by the shrill tones of a piccolo impersonating the flutes of a military band with the 15th-century French words of “The Armed Man”. After the reflective pause of the Call to Prayer and the Kyrie, “Save Us From Bloody Men” appeals for God's help against our enemies in words from the Book of Psalms (Psalm 59). The Sanctus has a military, menacing air, followed by Kipling's “Hymn Before Action”. “Charge!” draws on words from John Dryden's “A song for St. Cecilia's day” (1687) and Jonathan Swift citing Horace (Odes 3,2,13), beginning with martial trumpets and song, but ending in the agonised screams of the dying. This is followed by the eerie silence of the battlefield after action, broken by a lone trumpet playing the Last Post. “Angry Flames” describes the appalling scenes after the bombing of Hiroshima, and “Torches” parallels this with an excerpt from the Mahabharata (book 1, chapter 228), describing the terror and suffering of animals dying in the burning of the Khandava Forest. Agnus Dei is followed by “Now the Guns have Stopped”, written by Guy Wilson himself as part of a Royal Armouries display on the guilt felt by some returning survivors of World War I. After the famous Benedictus, “Better is Peace” ends the mass on a note of hope, drawing on the hard-won understanding of Lancelot and Guinevere that peace is better than war, on Tennyson's poem “Ring Out, Wild Bells” and on the text from Revelation 21:4: “God shall wipe away all tears”.