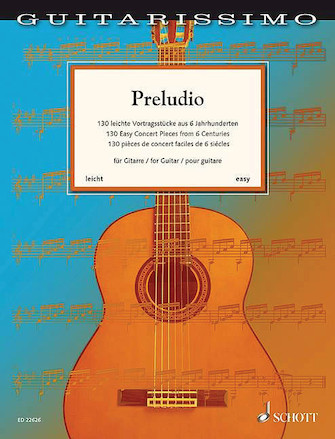 Preludio contains 130 easy attractive performance pieces from six centuries, thus offering the most important pieces for beginners' guitar lessons in one comprehensive volume. The repertoire is ideal for first performances at music schools, as pieces for competitions and examinations or just as a 'treasure trove' for teachers, pupils, students, and guitar lovers. The selected pieces can be played in the second to fourth year of guitar lessons. They are divided chronologically into five chapters and arranged progressively according to their level of difficulty. Each chapter refers to another epoch: Renaissance; Baroque; Classical period; Romanticism and early 20th century; modern, pop and world music. The result is a tune book which can already be used during or immediately after studying any guitar method. Most pieces can be played in the 1st and 2nd positions, without requiring any barré fingering or ties and slurs. The somewhat more difficult pieces that require small and large barré fingering as well as position playing are placed at the end of each chapter. The majority of the pieces are original works, and the editors have refrained from making any radical simplifications. Only a few difficult passages have alternatively been made easier to play such that the level of difficulty within a piece does not vary too much.