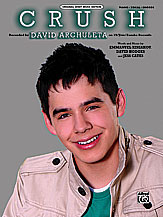 Season seven American Idol runner-up, David Archuleta, released his debut single “Crush” to positive reviews in August 2008. Debuting at #2 on the Billboard Hot #100, “Crush” has become the second debut single ever released by an American Idol runner up to out peaked the winner on the Hot 100. The original sheet music edition includes lyrics, melody line, and chord changes with professionally arranged piano accompaniment.