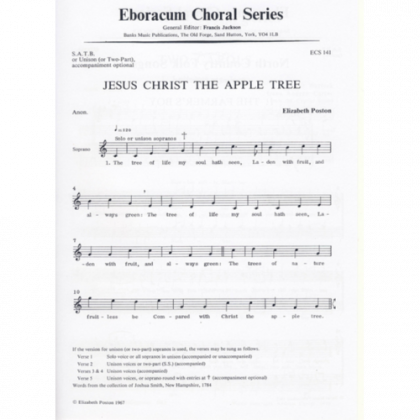 SATB, or Unison (or Two-Part)

Jesus Christ the Apple Tree (also known as “Apple Tree” and, in its early publications, as :Christ Compared to an Apple-tree”) is a poem, possibly intended for use as a carol, written in the 18th century. It has been set to music by a number of composers, including Jeremiah Ingalls (1764–1838), Elizabeth Poston (1905–1987) and John Rutter.

The first known publication, beginning The Tree of Life My Soul Hath Seen, was in London's Spiritual Magazine in August, 1761. This credits “R.H.” as the submitter and presumed author. R.H. has been shown most likely to refer to Rev. Richard Hutchins, a Calvinist Baptist clergyman then in Long Buckby, Northamptonshire. Another early printing, which cannot be dated and could be earlier, is an English broadsheet. This broadsheet uses the term “Methodists,” which certainly places it after about 1730, when the term first came into use at Oxford University, and probably substantially later, when the religious movement had spread.

The song may be an allusion to both the apple tree in Song of Solomon 2:3 which has been interpreted as a metaphor representing Jesus, and to his description of his life as a tree of life in Luke 13:18–19 and elsewhere in the New Testament including Revelation 22:1–2 and within the Old Testament in Genesis. Apple trees were commonly grown in England and there was an old English tradition of wassailing or wishing health to apple trees on Christmas Eve. The song is now performed by choirs around the world, especially during the Christmas season as a Christmas carol.