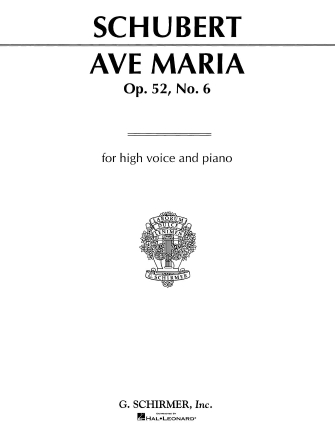 It is one of Schubert's most popular works. Beyond the song as originally composed by Schubert, it is often performed and recorded by many singers under the title “Ave Maria” (the Latin name of the prayer Hail Mary, and also the opening words and refrain of Ellen's song, a song which is itself a prayer to the Virgin Mary).

The piece was composed as a setting of a song (verse XXIX from Canto Three) from Walter Scott's popular narrative poem The Lady of the Lake, in a German translation by Adam Storck (1780–1822), and thus forms part of Schubert's Liederzyklus vom Fräulein vom See. In Scott's poem the character Ellen Douglas, the Lady of the Lake (Loch Katrine in the Scottish Highlands), has gone with her exiled father to stay in the Goblin's cave as he has declined to join their previous host, Roderick Dhu, in rebellion against King James. Roderick Dhu, the chieftain of Clan Alpine, sets off up the mountain with his warriors, but lingers and hears the distant sound of the harpist Allan-bane, accompanying Ellen who sings a prayer addressed to the Virgin Mary, calling upon her for help. Roderick Dhu pauses, then goes on to battle.