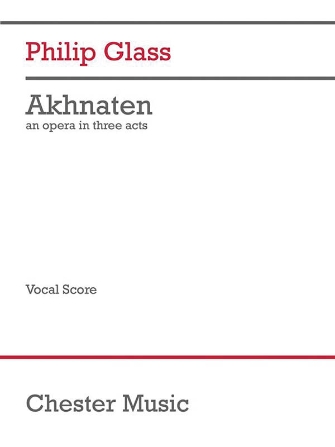 A new vocal edition by Jon Bunker of Glass's 1984 opera.

Akhnaten is an opera in three acts based on the life and religious convictions of the Egyptian pharaoh Akhenaten, written by the American composer Philip Glass in 1983. The libretto is by Philip Glass in association with Shalom Goldman, Robert Israel, Richard Riddell, and Jerome Robbins. Akhnaten was commissioned by Württembergische Staatstheater, Stuttgart and had its world premiere on March 24, 1984, at the Stuttgart State Theatre, under the German title Echnaton.

According to the composer, this work is the culmination of his two other biographical operas, Einstein on the Beach (about Albert Einstein) and Satyagraha (about Mahatma Gandhi). These three people – Akhenaten, Einstein, and Gandhi – were all driven by an inner vision which altered the age in which they lived, in particular Akhenaten in religion, Einstein in science, and Gandhi in politics.

The text, taken from original sources, is sung in the original languages, linked together with the commentary of a narrator in a modern language, such as English or German. Egyptian texts of the period are taken from a poem of Akhenaten himself, from the Book of the Dead, and from extracts of decrees and letters from the Amarna Period, the seventeen-year period of Akhenaten's rule. Other portions are in Akkadian and Biblical Hebrew. Akhnaten's “Hymn to the Sun” is sung in the language of the audience.